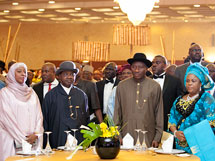 You are here: Home

This was disclosed by the Executive Director, LCRI, Dr. Oluwasina Gbenga Olabanji, during a pre-season training workshop for farmers on irrigated wheat production held at Kano State Agriculture and Rural Development Authority (KNARDA).
He said it is disheartening to hear that Nigeria imports wheat worth N635 billion annually when it can internally produce the quantity it needs for its consumption, adding that the recent result recorded on the increase of wheat production in some parts of the country is indeed encouraging.
Dr. Olabanji further stated that under the scheme, each farmer will get free seeds and two bags of fertiliser at 50% subsidy. He added that the institute would also in December release two new improved wheat seeds to farmers to enable them utilise the optimum planting period for better yield.
He revealed that to encourage wheat farmers, the federal government acquired seven most modern milling machines that will be used under a special package programme to create an enabling environment for marketing wheat internally.
The Managing Director of KNARDA, Malam Suleiman Sani, stated that the state government has engaged in various projects in assisting farmers in the state and called for sustainability of such programmes to enable farmers at the grassroots to benefit fully from them.
Participants at the training were drawn from the three clusters created by the institute under the wheat production scheme in the state. Similarly papers were presented to the participants on various agronomy techniques and pre-planting procedure.